Fall quarter eBike rider and WWU associate professor, Jennifer Green of Woodring College, makes the case with these five simple reasons why eBikes are something for you to consider. Read on:

“I was one of the lucky folks to get an e-BIke for all of Fall quarter. After having one, I don’t want to give it up. But, since others deserve a chance at trying them out, I will return the one I have and buy my own.
Here are my TOP 5 reasons for owning/borrowing an eBike:
5. A reason to buy cool bike gear/clothing
The wind and rain haven’t stopped me. Why? Back in August I bought a biking/rain jacket and pants with reflective material. I stay warm and dry when I travel. The wind can be a bit strong–but I haven’t been blown over…yet. The rain pants also keep me warm on these chilly December nights.
4. The fun of being outside
Because I live close to campus, I don’t even need to bike to work. However, I love going “the long way home” through Fairhaven, Boulevard Park, and back into Bellingham. It takes about 30 minutes rather than 5 minutes, but you can’t beat the scenery or the joy of cruising along the inter-urban trail.
3. Scheduling in a 1-car family
My husband and I have been a 1-car family for over 5 years and it hasn’t really caused too many problems. However, having the eBike has really made scheduling easier. I am able to visit a friend across town if my husband wants to drive to a poetry reading in Fairhaven. We don’t have to rush home to get the car to the other person.
2. Exercise/Health
About three weeks ago I logged my 100th mile. This was pretty impressive because I had only ridden about 20 miles on my regular bike the past 5 years. Biking in Bellingham is not that much fun for those of us who don’t have the physical ability to bike up Chestnut and Ivy and other streets. Since I live near WWU, I always have to go up steep hills to get home. Now with the eBike, those hills still require effort, but they are manageable.
The assist is actually helping. Because I bike more than I used to (10-15 miles/week vs. 0), I am finding that I am getting a little stronger–that I can go up more of an incline at lower levels of assist. (I admit, I still need the highest level getting up the steep hills).
1. Happiness
When I read blogs about eBikes, people seem to complain that they don’t go fast. That isn’t their purpose. I use mine as a commuter bike. It gets me from point A to point B while I am getting more exercise than driving. Plus, I am not polluting the air or struggling to find parking. Really, I am just happy cruising around Bellingham.

Now my husband and I are checking out different brands of eBikes because I don’t want to give up the joy of biking. If you have any suggestions or recommendations for a particular brand, I would be happy to hear them. ”

Thank you so much Jennifer! We couldn’t have said it better ourselves.
Happy riding is what it’s all about.

Connecting with bicycles is easy. They are objects that see us in triumph and tribulation, and through all of that they will always do what they’re told (mostly). One of our Fall quarter riders, Dana Oviedo, made a strong connection with his bicycle over the past ten weeks, but I’ll let him tell the story:

“Well the time has come, it is the end of winter quarter here on the WWU campus and I have to give up my new best friend, Jasper. Do not be too sad though friends; because she will go on to help other students get up that gnarly hill, get to class on time, and discover cool places they never knew existed.

As I walk away from my first eBike experience, I am a believer in this next step in bicycle evolution. I do not see this technology going away, quite the opposite I think we are just getting started with eBikes. I know for myself that revelation happened even before I returned by bike to Western’s Office of Sustainability, as I have been looking online for the past couple of weeks at the amazing array of possibilities and new designs.  Don’t get me wrong, I think that the eBikes we have here on campus are awesome and add to our understanding of transportation possibilities, but there are so many options out there for new eBikes that I don’t know what to do. Sure, eProdigy’s Jasper model was easy to ride and made getting around Bellingham fun but now I am thinking a louder horn and turn signals might be something to add. A couple of times during the darkening evenings I think a loud horn or light-up signals would have made me a little safer, but mostly they are just cool.  Probably just a matter of time before Giant and Tesla team up anyway.

For a non-traditional student who is older and heavier than most, this was a great experience and I am glad that I signed up to check out an eBike. Being active has really helped with school-related stress and something about flying down the hill after a long day of lectures and writing papers just makes college seem fun again, I think it even helped me bump that GPA up a bit. It has been a great quarter and I have loved riding all over Bellingham, yes even in the crazy rain and high winds of November.

In my final blog post, a heartfelt thank you to the fine folks at Western’s Office of Sustainability for bringing eBikes to campus and for bringing cycling back into my life.  I think they have made a lasting change in my life, as the darkness falls over B’Ham for the winter, I think I will keep an eye out online for my new best friend.”

Ah Dana, thank you for this sweet epilogue to your ten week riding experience with our Jasper eBike. Here at Western Washington University’s Viking eBike program we are introducing the campus community to electric assist bikes. Our introductions are often on an individual basis through our orientations and events. It is rewarding to enlighten someone to the value of the Viking eBikes, and as the Campus Bicycle Educator I get to see their reactions firsthand.

In the greater world, however, the notion of why electric bikes are exciting, useful, and attractive seems to speak for itself. If we look off campus and across our borders we will see the ambitious use of electric bikes and we may get a clue to why millions of people are find eBikes so practical.

The Navigant Research group details the reasons behind the growing use of eBikes in a recent article.  “Rising levels of population density and traffic congestion are driving interest in different modes of transportation. E-bikes are uniquely positioned to be a primary benefactor of this trend since they are low in cost relative to cars, do not require licenses to operate, and can take advantage of existing bicycling infrastructure.” These reasons are especially relevant in high density cities where congestion is a major issue.

Projections from Navigant Research show that while China clearly does dominate the eBike market currently with manufacturing and usage, their growth will slow and decline in the coming years. On the home front, Statista, an online statistics company issued a report recently documenting the rise of cycling throughout the United States. “The number of cyclists/bike riders saw a big increase between 2012 and 2017, increasing from around 51 million riders to slightly more than 66 million riders in 2017. Prior to 2012, the number of cyclists only increased slightly each year. As more people recognize the many benefits of biking/cycling and if municipalities support cycling infrastructure, it is likely that more people will start to ditch their cars for bikes. ” Also on the rise for eBikes internationally are their use in institutions. Germany’s public mail service, Deutsche Post, has just launched their thousandth StreetScooter mail carrying electric bike into their mail delivering fleet. But that’s not all: “Deutsche Post DHL Group already operates the largest electric vehicle fleet in Germany, with about 2,500 StreetScooter Work electric trucks and approximately 10,500 pedelecs (e-bikes and e-trikes); in the medium term, the company plans to replace its entire delivery fleet with electric vehicles.” 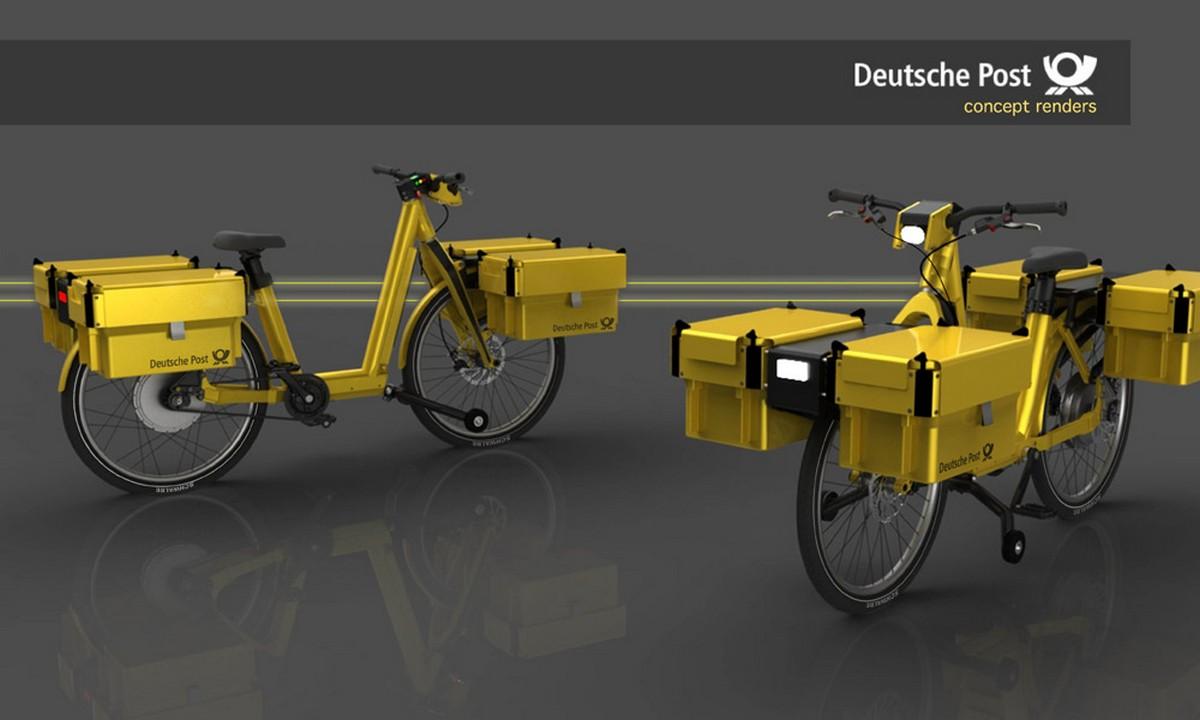 Keeping in mind the greater context of our work at Viking eBikes by documenting the trajectory of eBikes internationally is essential to fully understanding how we can be most effective. Our work does not occur in a vacuum despite it being largely on an individual basis. We are also not alone in the understanding that to create a safer and cleaner 21st century we will need a vast array of individuals, institutions, and enthusiasts supporting the adoption of truly sustainable transportation options. WWU student, Andrew Westenbroek, tells it like it is in this rider report:

“My experience using the e-bike was amazing. I used the bike for getting to and from classes and general riding. It rides well both on and off roads. The e-bike is well designed for commuters as it has a throttle that allows for quick starts in traffic and on hills in addition to a bright front-facing light that allows for night riding. I found the e-bike to be easy to ride, handle, and keep secured. A bike lock and other equipment essentials are provided by the Viking eBike Program. I would recommend that anyone looking for a fun way to get around campus, town, or other exciting locations give the WWU Viking eBike a try. No experience with electric assist bikes is needed, and this is a great way to start exploring the world of electric transportation. I look forward to checking an e-bike out again soon!”

Thanks for your enthusiasm and support, Andrew!